Age no barrier to Cleo – a year after life-saving operation 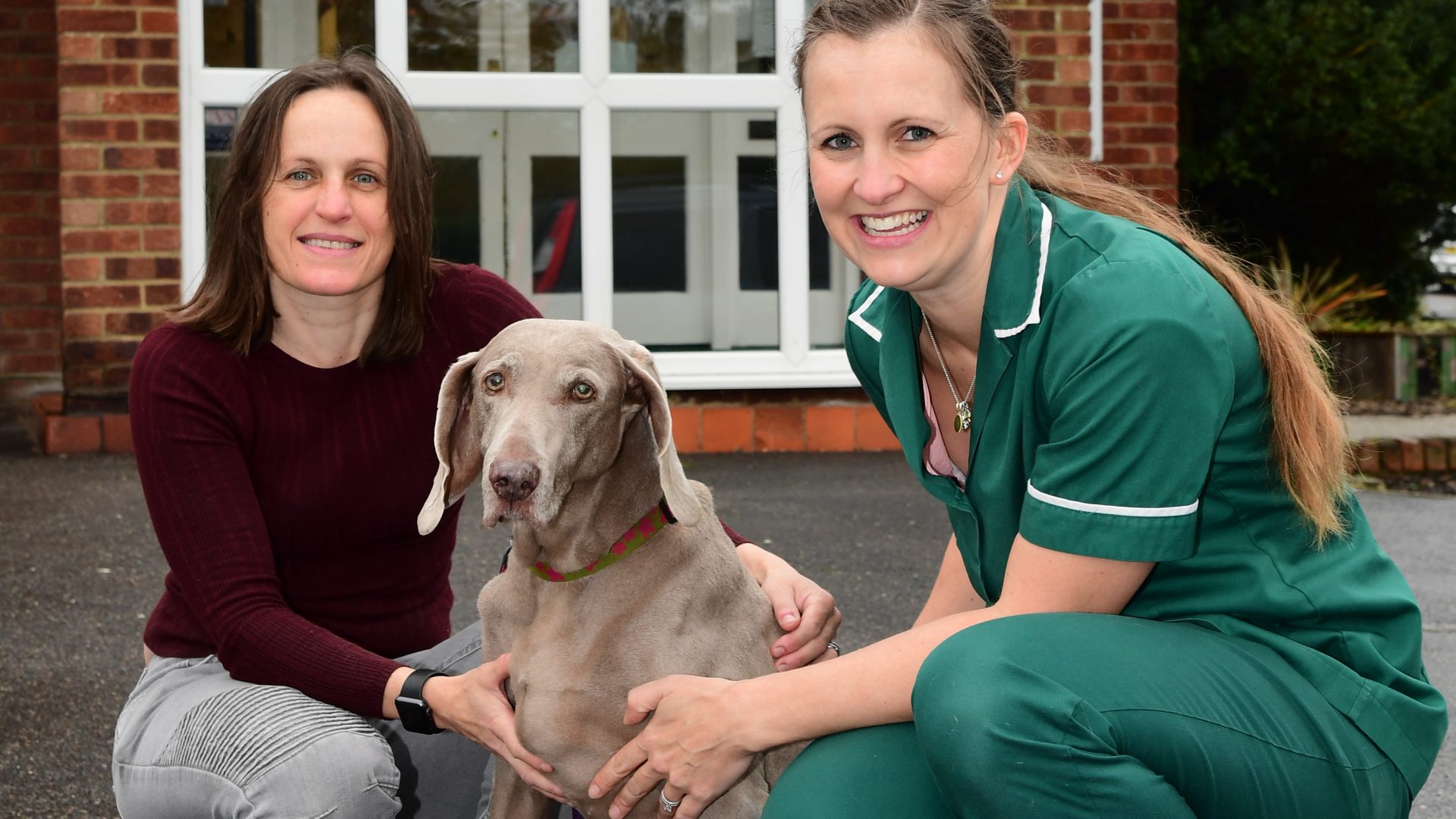 MIRACLE dog Cleo is celebrating an extra special anniversary after vets gave her a new lease of life.

The beloved family pet underwent an emergency operation at Ashworth Veterinary Group in Farnborough after being rushed to the surgery when she suffered a life-threatening gastric torsion.

Gastric torsion, or bloat as it is more commonly referred to, occurs when the stomach dilates and then rotates or twists.

It is one of the most serious emergencies vets encounter and, although rare, it is life-threatening, especially because Cleo was then aged 14.

Because of her advancing years, surgery was incredibly risky but, one year on, the Weimaraner is continuing to defy all expectations and is still living life to the full at the age of 15.

Vet Oonagh Clarke performed the delicate operation in November 2016 and, thanks to the skills and care of the Ashworth Veterinary Group team, Cleo pulled through.

She popped back to the practice this week on the one-year anniversary of her operation to meet the team that saved her life and have closely monitored her recovery.

Ashworth Veterinary Group senior veterinary nurse Kerry Lambert, who assisted in the operation, said: “Because of Cleo’s age, we didn’t know if she would survive surgery so, with great sadness, we provided the option of euthanasia.

“Deep-chested dogs like Weimaraners are high risk for gastric torsion, which happens when the food in the stomach hasn’t had an opportunity to digest and pass through the gut.

“Gastric torsions are extremely rare and surgery is risky for any dog, but particularly one of Cleo’s age as she was then 14.

“Due to the speed at which Mrs Woodhouse recognised the symptoms and got Cleo to the vets, it aided her potential recovery.”

Cleo’s ordeal began when owner Dawn Woodhouse took her for a walk in woods near her home in Camberley with her other dog, Ralf, a German Pointer.

Cleo attempted to be sick and then Dawn watched in horror as her dog’s body began to expand to twice its normal size.

Dawn said: “I knew straight away it was bloat and how serious it is as I had experienced it with another dog. I rushed her to the vets and, due to her age, we didn’t know if she would survive.

“We knew she was a fit dog and a fighter so wanted to give her every chance.

“She was on a drip for a couple of days, but her recovery was amazing as, three weeks later, she was on holiday with us in Devon and chasing a ball on the beach.

“They are an absolutely amazing team at Ashworth Vets and I can’t thank them enough for saving her life. Cleo is a miracle and we can’t believe we still have her.”

Ashworth Veterinary Group provides advice and guidance to owners of elderly pets like Cleo, who visits the practice for health checks and medication for arthritis.

Kerry added: “The average lifespan of a Weimaraner is 10 to 13 years, so Cleo is doing incredibly well and to have survived major surgery is nothing short of a miracle.”