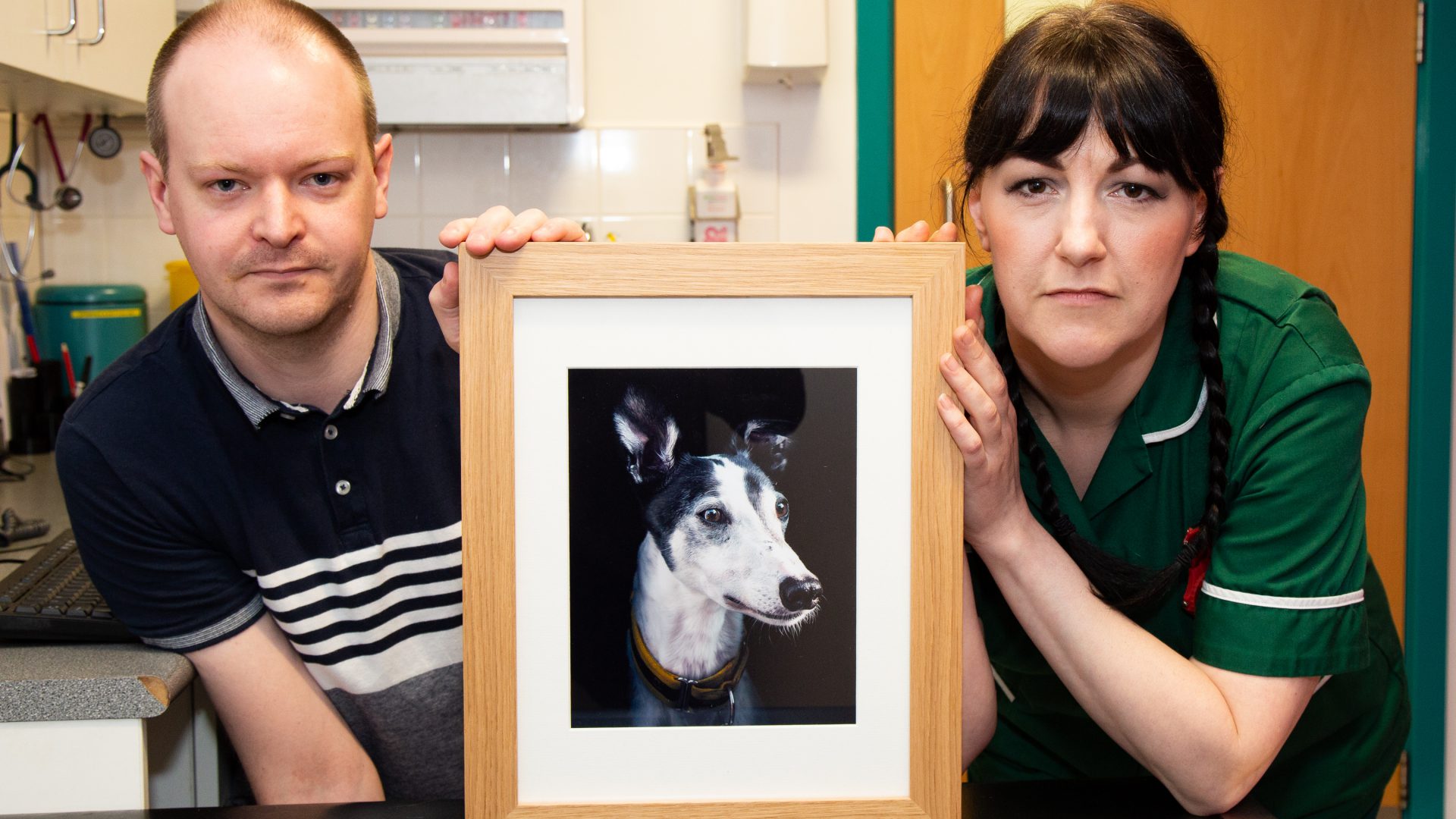 WOODCROFT Veterinary Group in Greater Manchester is warning dog owners to be extra vigilant after a dog died from Alabama Rot.

Vets confirmed a case of Alabama Rot in a pet from Sale after treatment at Woodcroft Vets’ main hospital in Cheadle Hulme.

Alabama Rot has been increasing rapidly across the UK and one of the latest cases seen by Woodcroft Vets involved Eric, a lurcher, who was brought to their emergency A&E department.

The beloved family pet, owned by Sale couple Hannah and Chris Upton, was brought in with open skin lesions on his leg and kidney failure, but it was not possible to save him.

Also known as Cutaneous and Renal Glomerular Vasculopathy (CRGV), Alabama Rot was first detected in the UK in 2012 and the number of cases has risen each year.

The condition causes dogs to develop skin wounds or ulcers, most commonly on the limbs of face, and in some cases it can cause severe kidney failure, which is often fatal. As well as skin lesions, signs can include increased thirst and urination, vomiting and lethargy.

Woodcroft Clinical Director of Hospital and A&E Services Dave Tymms said: “We don’t want dog owners to panic, given the rarity of the condition, but it is advisable to take sensible precautions.

“Unfortunately, as the cause is currently unknown, it is difficult to give specific advice on prevention. One theory is that environmental bacteria may be involved.

“Dog owners may wish to consider bathing their dogs if they become wet or muddy on a walk.

“It causes skin lesions and, if kidney problems develop, the prognosis is poor. If anyone thinks their dog may be developing signs of Alabama Rot, or they have concerns about a wound, they should contact their vet immediately.”

Vets battled round the clock to save Eric, who came to the practice as an emergency referral with suspected Alabama Rot.

Over the space of a week, his heartbroken owners witness how he became lethargic, stopped eating and developed large open skin lesions and serious kidney problems.

He was treated for acute kidney problems with intravenous fluids, pain relief and antibiotics, but his condition continued to deteriorate and he had to be put to sleep.

Post mortem testing of his kidneys and skin lesions confirmed he had died of CRGV.

Mrs Upton said: “At first it was just a swelling on his wrist joint, which became swollen and sore within hours and he was struggling to walk so we thought he had a fracture.

“It was bandaged by our own vet and when it came off, lesions developed and quickly spread quickly up his whole leg.

“He kept on deteriorating and we ended up at Woodcroft Vets A&E department as an emergency.

“We’d read about Alabama Rot, but you never think it will happen to your pet.

“We are devastated because he was a much-loved family pet. He was a rescue when we got him at 18 months old and he loved fuss and attention. It has been a terrible shock and just awful to see him so ill.

“We want to help raise awareness of Alabama Rot so other dog owners don’t go through what we have.”