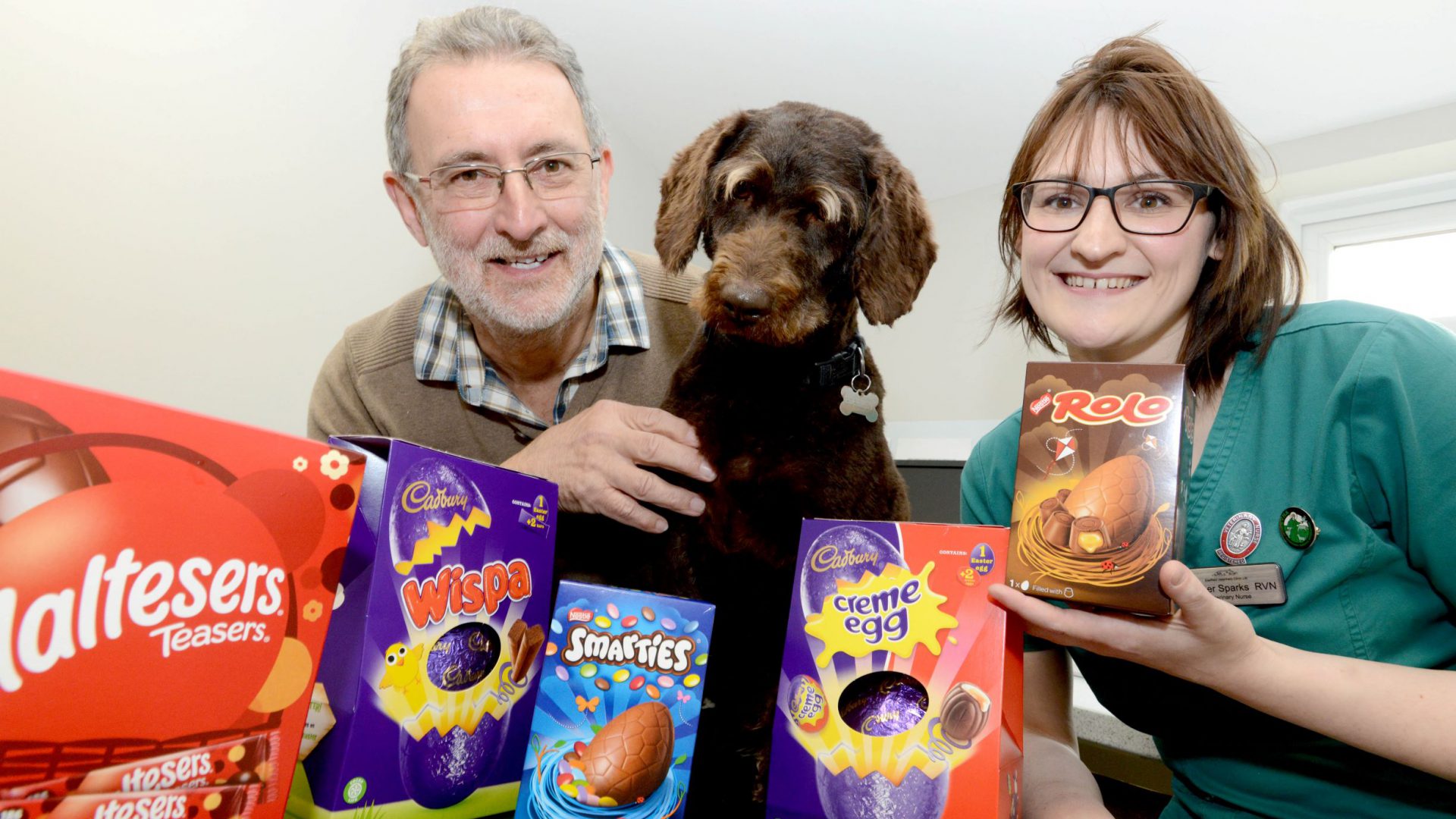 BOSELEY, the greedy labradoodle, is in the dog-house after guzzling four chocolate Easter eggs.

The much-loved family pet stole the treats that had been hidden by his owners.

He needed an emergency trip to Eastfield Veterinary Hospital in North Thoresby, near Grimsby, as chocolate is potentially fatal to dogs.

Chocolate contains a chemical called theobromine, which is toxic to pets, and even small amounts can cause heart problems, hyper excitability and fits.

Vets had to induce vomiting to ensure no harm came to Boseley, who had also wolfed down three of crème eggs inside one of the Easter eggs.

The four Easter eggs had been hidden in a spare bedroom at the home of Peter Hind, who had bought them as raffle prizes for a local charity.

But Boseley managed to sniff out the sweet treats and ate four big Easter eggs and three crème eggs in one sitting, before he was discovered by Peter.

Eastfield Vets is warning pet owners to be extra vigilant over Easter as they prepare for an increase in the number of pet emergencies. Easter is the second busiest time of year after Christmas for cases of chocolate poisoning.

Peter, who lives in Tetney, near Grimsby, said: “Boseley is a real glutton and a big character. We accidentally left the spare bedroom door open and he went in and helped himself.

“When I found him, he was happily eating. He had just started on his fourth crème egg and didn’t look remotely guilty. I think he was just disappointed we’d found him.

“He has pinched a small amount of chocolate before, but he’s never eaten anything on this scale and we knew immediately we had to quickly get him to the vets.

“I was at the vets within 10 minutes and Eastfield Vets were great with him. He was treated within 20 minutes of me making the phone call to them.

“Luckily, he has suffered no ill effects and, from now on, all Easter eggs and chocolate will be hidden in a tall cupboard, well out of reach.”

As well as chocolate, raisins in hot cross buns can be deadly to pets, while allowing pets to indulge in the traditional Easter Sunday dinner can cause them problems with gastroenteritis or choking on bones.

At this time of year, vets often treat cats that have been poisoned by lilies and daffodils, crocus and tulip bulbs are toxic to dogs.

Eastfield Vets veterinary nurse Heather Sparks said: “Whether it’s caused by well-meaning owners treating their pets with chocolate or chocolate accidentally left within their reach, we see a lot of dogs suffering from chocolate poisoning at this time of year.

“The higher the level of cocoa in the chocolate, the more theobromine it contains, so the darker the chocolate, the greater the risk. Symptoms of chocolate poisoning can include vomiting, diarrhoea, increased heart rate, and can lead to seizures and cardiac failure.

“The safest option is to keep chocolate and sweets locked away, well out of reach of pets.

“Even the most well-behaved pets can be tempted to steal food so make sure they can’t get access to the tops of cookers or kitchen worktops.”

Eastfield Vets is urging owners to contact their vet immediately if they suspect their pet has eaten anything toxic.