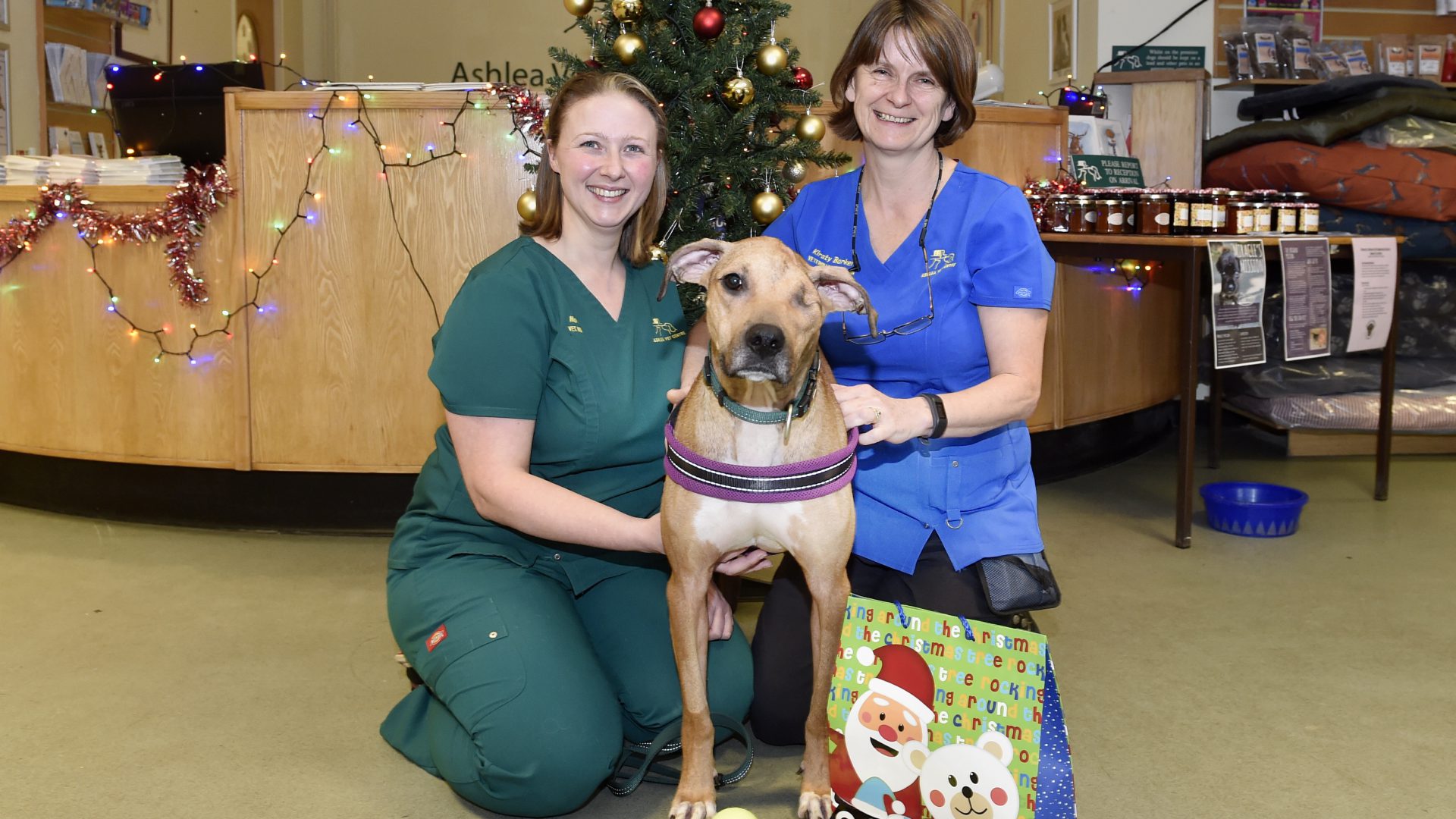 A BADLY beaten dog, who was abandoned near Carlisle, is set for a happy Christmas after being adopted by a kind-hearted veterinary nurse who helped to save his life.

Four months after he was found wandering dazed, Bruce, a bull-lurcher, is happy and well after recovering from horrific injuries, and will spend his first Christmas in his forever home with his new owner.

His life was saved by the team at Ashlea Vets in Carlisle, where Clinical Director Kirsty Barker described his plight as the worst cruelty case she has ever seen in 30 years as a vet.

Bruce was brought into the practice on Port Road Business Park on August 31, after being found in Little Orton, near Carlisle, battered and covered in blood.

He had suffered multiple skull fractures, his eye was hanging out and he had terrible burns to his back, which were thought to have been the result of being scalded.

Ashlea’s veterinary team performed life-saving surgery and Bruce, who was severely underweight, had to have an eye removed as it was damaged beyond repair.

Vets and nurses at Ashlea Vets faced a tense wait to see if the tan coloured dog survived.

Now, veterinary nurse Marie Coleman, who looked after him around the clock for the first 48 hours, has permanently adopted Bruce, who is enjoying life again at his new home near Carlisle.

Marie said: “Bruce was in a terrible state when I first saw him, and I spent the weekend nursing him following his operation.

“I fell in love with him because he has the sweetest temperament and never grumbled when he was being treated even though he must have been in terrible pain. I took him home a week after he came in and he has settled in fine.

“Bruce is now a lovely family pet. He sleeps on the sofa cuddled up with my little boy, George. He loves long walks and running about in the countryside and playing with dogs we meet. He is happy and healthy and hopefully he has a long life ahead of him.

“Christmas is going to be really special with him in our lives. He’ll have a long walk on Christmas morning and then have his own dinner of turkey, pigs in blankets and he loves carrots. He will even have his own presents under the tree.”

Bruce returned this week to Ashlea Vets for another check-up and staff presented him with a Christmas present. He recently underwent a further successful operation on his broken jaw at a referral veterinary practice in Glasgow.

Vet and Clinical Director Kirsty Barker said: “I felt physically sick when he first came in. He was so sad and depressed and suffering from terrible injuries.

“I’ve never seen a cruelty case like it and I never want to again because it was wanton cruelty. We’re delighted with his progress as he is a lovely dog and we’re thrilled he has found a lovely home.”

Ashlea Vets was inundated with goodwill messages from well-wishers and a fund raised £4,000 to pay for his extensive treatment.

Marie added: “We would like to say a massive thank you to everyone who contributed to the JustGiving page.

“The public really took him to their hearts because they were horrified at what happened to him. I can’t understand what sort of person would do something like this.

“Bruce has found his happy ending and he has a safe home for the rest of his life.”