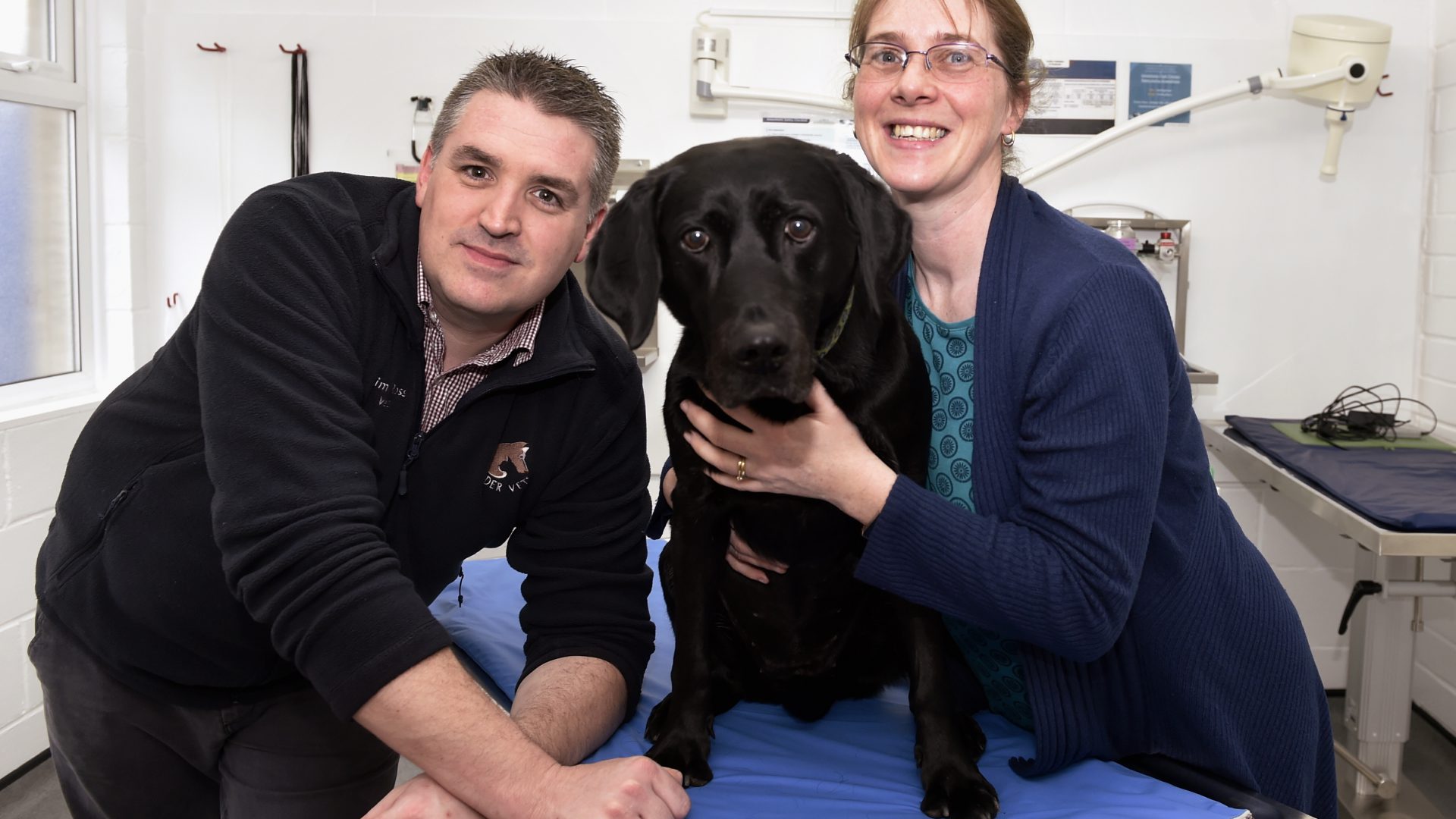 A FAMILY dog that suffered devastating injuries after being knocked down has made a miracle recovery, thanks to the care and skill of a Galashiels veterinary team.

Clinical Director Jim Ross and a team of eight vets and nurses from Border Vets managed to save the life of Labrador Teal, who was rushed in as an emergency following a road accident in January.

Teal ran out into the road while out walking with devoted owner Jackie Paton after it is believed she misheard her command to sit and wait.

The much-loved family pet would have bled to death had it not been for the quick-thinking actions of Jackie and husband, who rushed her to the surgery in Gala Terrace.

An ultrasound scan showed heavy internal bleeding and there were fears a major organ could have ruptured.

Teal underwent a delicate two-hour operation, where it was discovered the eight-year-old had a ruptured spleen and lost a pint-and-a-half of blood.

Jim and his team managed to stem the blood loss and removed part of Teal’s spleen, before giving her a transfusion of her own blood.

After a tense 48 hours to make sure she recovered from surgery, Teal was allowed home and has now been given the all-clear by the practice after her incredible recovery.

Jim, who had joined the practice as new Clinical Director only a month earlier, paid tribute to the teamwork that helped to save Teal’s life.

Jim said: “I was initially concerned because Teal had heavy internal bleeding and we had to find the cause as we didn’t know if it was a major vessel. When we opened up her abdomen, it was full of blood, so we performed an autotransfusion, where blood she was losing was filtered and put back into her veins to avoid having to find a donor.

“We discovered that the spleen had ruptured where she had been hit by the car and it was bruised and badly damaged. We then had to assess if other organs were damaged, but there was no further visible trauma or blood loss. She was very lucky it was the spleen rather than another organ.

“Because she lost so much blood, she wasn’t out of the danger zone after surgery. Fortunately, blood tests showed she was regenerating her own blood cells.”

He added: “Not only did the owner react very quickly, but the whole team at Border Vets pulled together and stayed behind long after their working day had finished to ensure the best possible outcome for Teal.

“I’m over the moon with her recovery as she looks great and I can’t praise the fantastic teamwork by everyone at the practice enough.”

Owner Jackie said: “I couldn’t see a positive coming out of this situation and was worried about having to tell the children she had been put to sleep because she is part of the family. But I knew she was in the right place at Border Vets. It’s such a relief that she is doing fine and is back to her old self.”