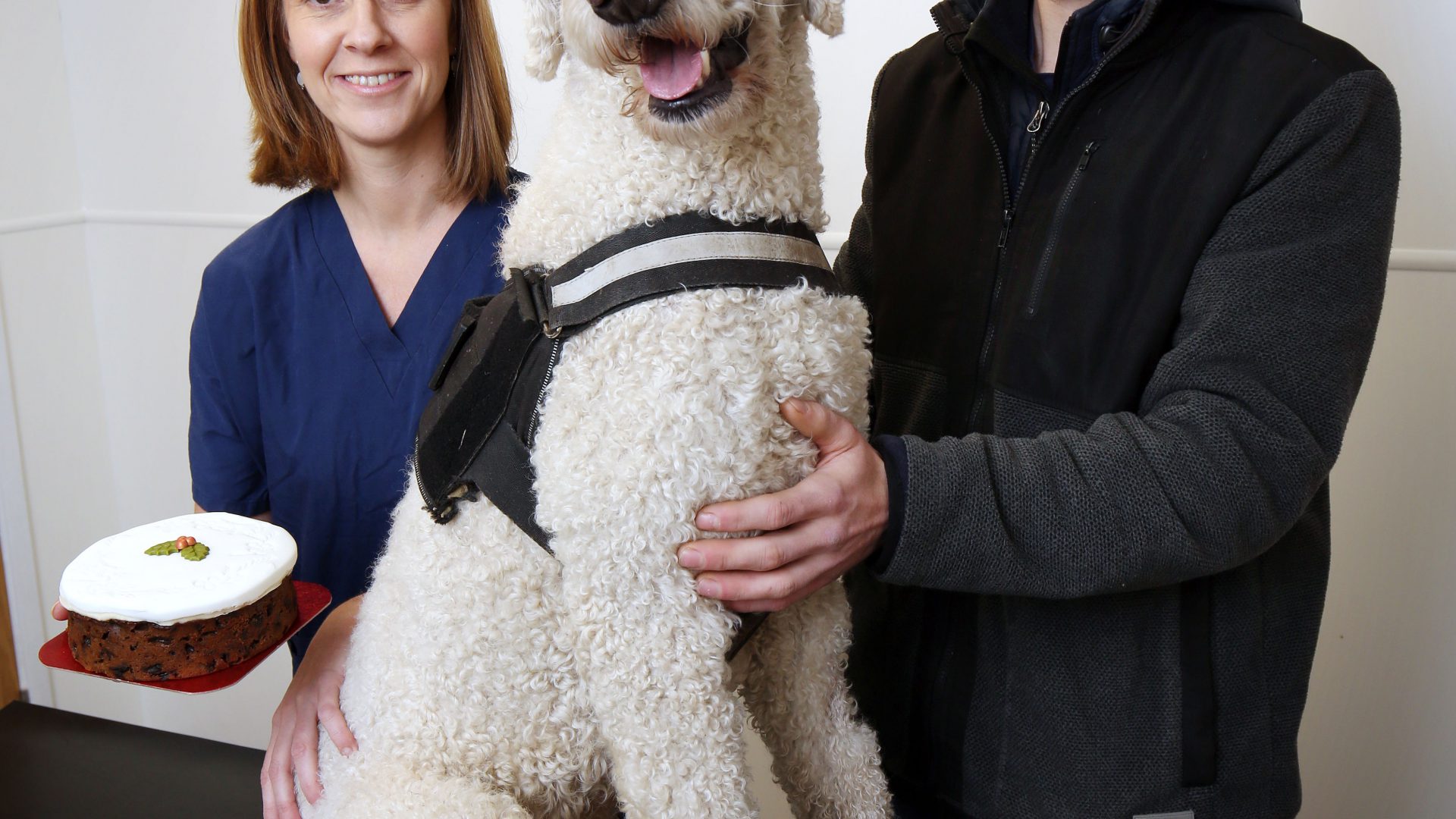 GREEDY golden doodle Quinn is in the doghouse – after needing an emergency trip to the vets when he devoured his family’s Christmas cake.

Quinn jumped five feet off the ground on to a kitchen bench to steal the homemade fruit cake, wrapped in greaseproof paper and foil.

However, Christmas cake contains raisins, sultanas and currants, which can cause kidney failure in some pets and even prove fatal.

When his owners realised what had happened, they dashed to Westway Veterinary Group’s main hospital on West Road, Newcastle, where vets induced vomiting to ensure Quinn is able to enjoy a happy Christmas at home with his owner in Jesmond.

The mischievous pooch is owned by Alistair Kendall, whose parents, Dave and Sheila, had been looking after Quinn, a labrador crossed with a poodle, when he raided their homemade cake.

Alistair said: “Quinn is very mischievous and curious – and he loves food. My parents were looking after him and popped out for only an hour. The cake was placed well out of reach – or so we thought. But he managed to pull is down and ate three-quarters of the cake.

“When my parents returned home, there was the remnant of the cake on the floor, but Quinn was showing absolutely no shame at all.

“He is absolutely fine after treatment at Westway Vets, who advised us to take him over immediately. He’s still looking for food, so we now have the second cake made by my mum in a cake tin and hidden in a cupboard.”

Westway Vets is now warning owners to be extra vigilant during the countdown to Christmas as they prepare for a flurry of cases of pets being brought in after suffering illness or injury.

In the run up to Christmas, most homes are full of extra food and drink and there are more cases of potentially fatal poisoning than at any other time of year, with cats and dogs rushed to vets after eating foods that are potentially toxic.

Chocolate contains a substance called theobromine which is toxic to dogs, while other festive hazards include poinsettias, pine needles, holly berries and mistletoe, which can all cause illness if eaten.

Westway Vet Clinical Director Helen Clark said: “During December, we see many cases of pets that have eaten something they shouldn’t have and the number increases as we get closer to Christmas Day.

“We see a lot of examples of poisoning over the festive period. In most cases, the owner was completely unaware of the hidden dangers and was simply intending to be kind to their pet.

“You don’t want a poorly pet or a trip to the vets on Christmas Day. Even worse, would be losing a pet over the festive period, so we urge owners to be extra careful.

“We see a lot of cases of dogs stealing the Christmas turkey or taking chocolate from the under the tree, so it is important to keep food and treats out of reach of pets.”