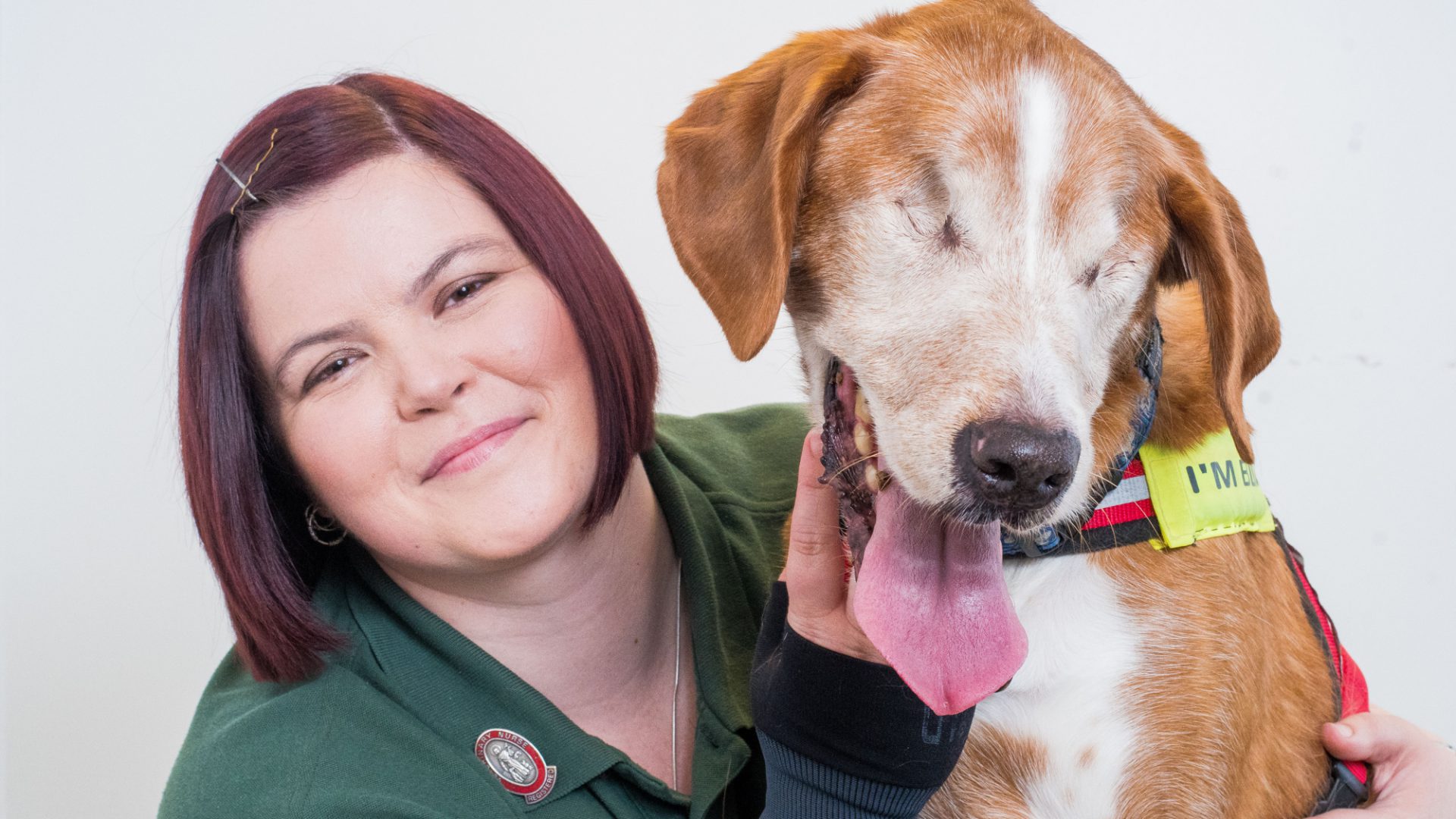 LIKE all dogs, Scully loves chasing and retrieving toys, and enjoying long walks in the countryside.

He gets excited when owner Nicole Paprotny puts her jacket on and grabs his lead to take him for a walk, and races to greet family members on their return home from work.

Yet, for the past two years, Scully has been completely blind since having both eyes removed.

The 12-year-old Labrador x Boxer suffered from a painful condition known as dry eye, caused by the inadequate production of tears, where the eyes of affected pets become dry, red, inflamed, sensitive and extremely painful.

Attempts to treat the condition, including an operation to direct salivary glands to his eyes to lubricate them, failed, and Scully had his left eye removed in August 2015.

Just two months later, Nicole faced the agonising decision whether to have his right eye removed, leaving him completely blind, or have him put to sleep.

Nicole, a veterinary nurse at Dunedin Vets in East Lothian, wanted to save her pet – and Scully hasn’t allowed being blind to destroy his zest for life.

He is able to do everything he did before tragedy struck as he relies on his other senses, including hearing and smelling, and lives life to the full.

Nicole, who lives in Tranent, said: “Scully quickly adapted to life without his sight. Within two weeks he was playing fetch as he listens to where his toy drops on the ground and goes to pick it up.

“He can find his feed and water bowls as he knows precisely where they are through smell. He comfortably navigates his way around the house as he senses where obstacles are. When we go to meet my mum from the bus, he can pick her out even if there are other people around.

“All his other senses strengthened after he lost his sight. He can even tell when I’m putting my jacket on to take him for a walk and gets excited.”

Nicole bought Scully a special harness, with the words ‘Bling Dog’ on, to alert passers-by, and vets and fellow veterinary nurses at Dunedin Vets in Tranent, where she has worked for 12 years, have been a great support to her and her pet.

“He was absolutely fine until 2015, but he started getting sleep in the corner of his eyes and then conjunctivitis” she said.

“Within the space of a week he stopped producing tears and various eye drops to correct the problem failed. He had to go to a specialist in Edinburgh.

“He was in agony because his eyes were so dry, and he had to have drops every hour.

“It crossed my mind that I might lose him. The choice was to make him completely blind, or we would have to put him to sleep on humane grounds as he was constantly in pain.

“I was exhausting all the options and it was very hard for and for me as he is a much-loved pet.

“I’m so pleases I took the decision I did as he is so happy. He loves going for walks and enjoys a great quality of life.”

A survey by Bayer – maker of Remend Dry Eye Lubriants Drops – in 2015 found that 46% of owners were not aware that dogs can potentially suffer from the condition, despite the fact that is affects an estimated 375,000 dogs in the UK.

Because early diagnosis and treatment can have a significant impact on prognosis, speak to your vet if you suspect your dog may be affected.

Dunedin Vets has four sites across East Lothian, with its main practice in Tranent and branch surgeries in North Berwick, Prestonpans and Dunbar, with a total of 21 staff working across the group. It serves a client base of 5,000 pet owners from the outskirts of Edinburgh, across to Berwick-upon-Tweed, and down to the Borders.