Heroine nurse saves vet after he chokes on steak pie 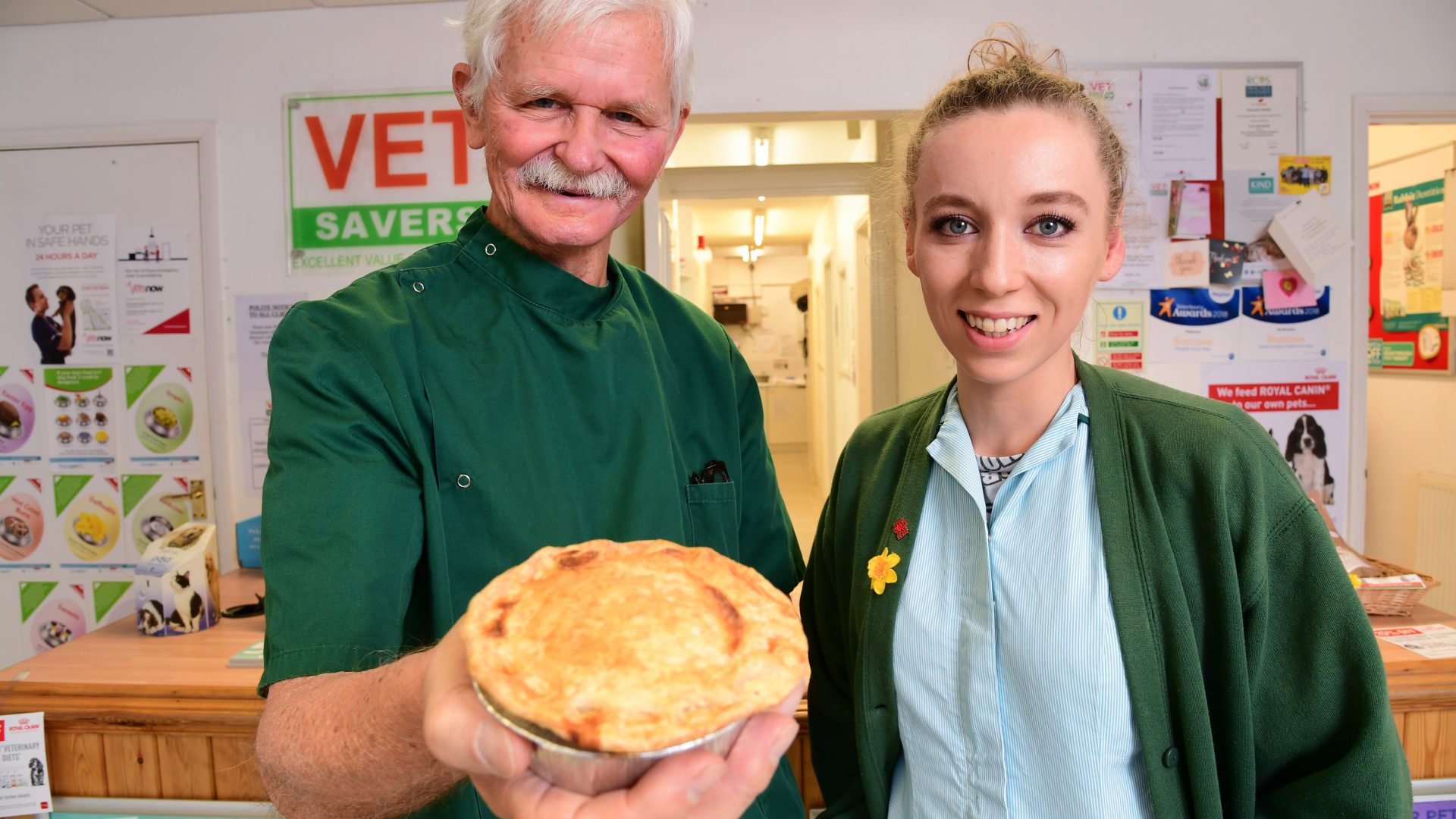 AN Essex nursing assistant has been hailed a heroine after saving the life of a vet when he choked on a steak pie.

Tia Brandon, who works at the Debden branch of VetSavers in Essex, rushed to the aid of vet Dr George Malynicz after hearing him coughing and choking in the surgery.

George believes he was only moments from death before Tia performed first aid on the senior vet and he coughed up the pie crust obstructing his windpipe.

Tia had once seen the Heimlich manoeuvre – abdominal thrusts used to treat upper airway obstructions – demonstrated on TV and performed the procedure, which saved the life of her colleague.

George recovered immediately and show his appreciation for saving his life by buying Tia a huge bouquet of flowers.

George, who lives in Chelmsford, said: “I had left my clinic to go to the supermarket to buy my lunch. I bought a meat pie, which I heated in the microwave at work. I sat down in the office, took a bite and instantly couldn’t breathe.

“I tried coughing and exhaling strongly and banging my chest and abdomen hard. I could see my life rushing away before me.

“I sprung into the corridor where Tia saw immediately I was in trouble.

“I indicated that I couldn’t breath and banged my own chest to prompt her to perform the Heimlich manoeuvre. It was important that she realised immediately what was wrong.

“She moved quickly behind me and holding her fists together, she started to squeeze my lower chest sharply. Nothing happened at first and she kept going.

“I felt something moving in my windpipe and leaned forward and managed to cough out a piece of pie crust no bigger than half my little finger. After a few more coughs and splutters and I could breathe.”

George added: “Without doubt, Tia saved my life. It made me realise how close in life we are to death. Many people either would not know about Heimlich manoeuvre or lack the confidence to do it. Some might have called 999 and the ambulance would have arrived to find me dead.”

Things could have been much worse had Tia not delayed her own lunch break to check the surgery in Debden Broadway.

Tia, 25, said: “I heard George and he came out of the office hitting his chest with his fists. I could tell he was unable to breathe and had turned a weird shade of blue.

“It all happened so quickly and my only thought was that I didn’t want George to die on me.

“I have never performed the Heimlich manoeuvre but I’ve seen it on TV. I just reacted immediately and I was so relieved when George started to breathe again.”

It was only after the drama that the enormity of what had happened hit Tia, who lives in Chigwell, Essex, and has worked at VetSavers – part of Best Friends Veterinary Group – for 18 months.

She said: “I was shaking afterwards with pure adrenaline as it was quite traumatic.

“Working as a nursing assistant means you are often confronted with tense situations with pets, so I think that helped to keep me calm in an emergency.”

George has full recovered and is extremely fit. For the last five years, he has sailed his own boat mostly single-handed for the whole summer in Greece.