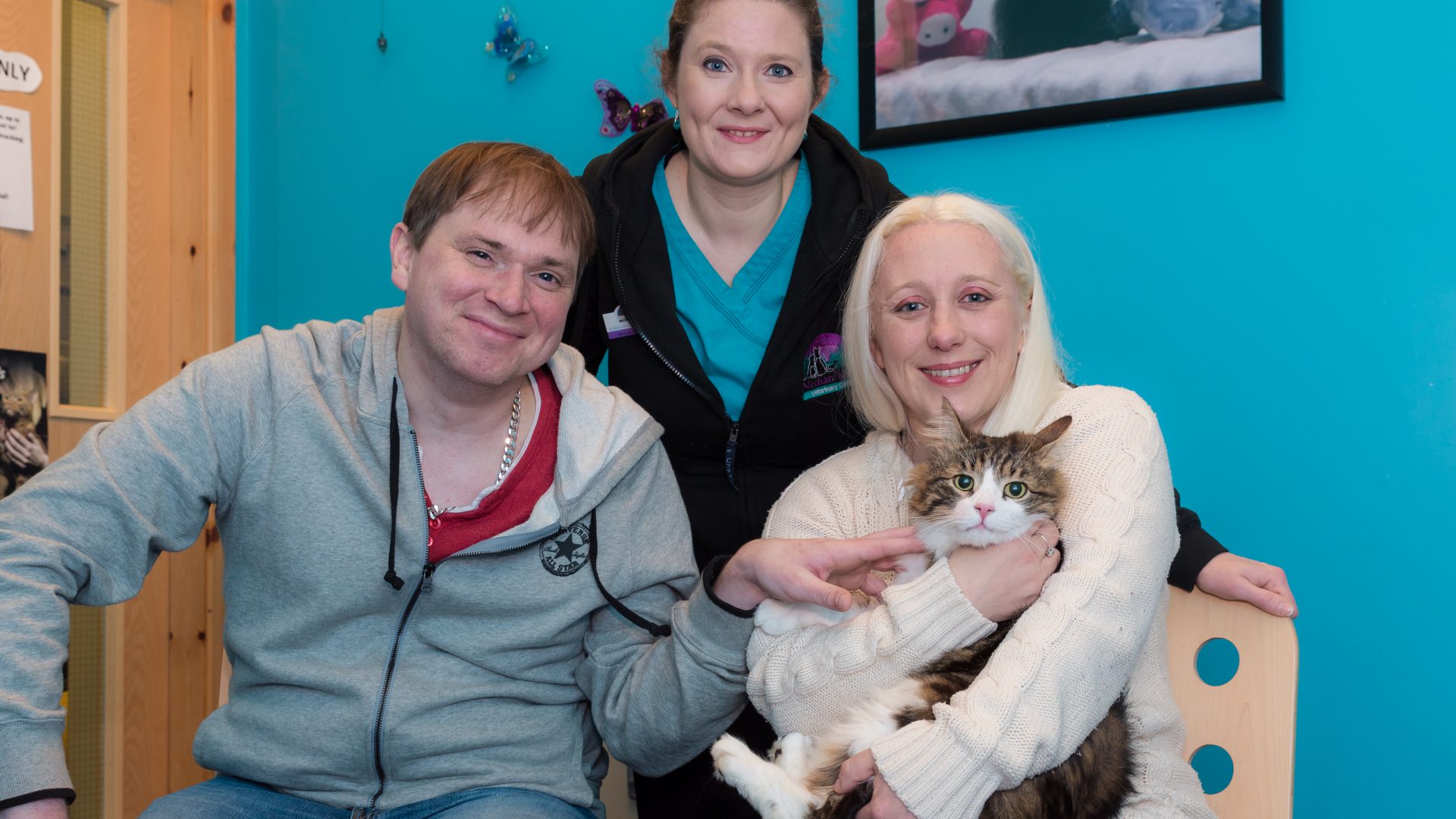 A MIRACLE moggy, who suffered five broken bones in a mysterious accident that nearly killed him, is celebrating an extra-special anniversary.

Koopa, a four-year-old tabby, suffered a devastating array of injuries in what was at first feared to be a cruelty attack.

The much-loved family pet suffered broken bones from head to tail. They included a fractured jaw in two places, a fractured hard palate and two vertebral fractures, including his tail.

Amazingly, he survived, thanks to the skill and care of staff at Nethan Valley Veterinary Centre in Lesmahagow, and 12 months on from the accident he returned to the practice with his owners to say a big thank you to the vet who saved him.

Clinical Director Claire Corridan brought him back from the brink of death, although Koopa was so badly injured he spent two weeks in hospital being fed through a tube and had to have his tail amputated.

Owners Rowena and Chris Sweeney, who live in Lesmahagow, Lanarkshire, are still none the wiser what happened to their beloved pet on that fateful day in December 2016 when he returned home covered in blood and dragging his hind quarters.

There were fears the gentle cat had been the victim of cruelty and one theory was that someone had swung him by the tail and dropped from a height. However, six months later, the couple discovered a hole in the roof of a disused outbuilding and wonder if he could have fallen through.

Claire said: “Considering we talked about the sad possibility of Koopa being put to sleep, he has made an incredible recovery.

“He had so many injuries and there was so much wrong with him that we just simply had to tackle one problem at a time and, one year on, I couldn’t be happier with his recovery.

“He was in a pitiful state when he came in with major trauma injuries and was in terrible pain.

“They were really unusual injuries and there was talk of cruelty, which was upsetting for his owners, but we have never got to the bottom of it.

“His jaw had to be wired for a month and we had to amputate his tail because he was in pain and had difficulty going to the toilet.

“The fact he hasn’t got a tail is the only visual sign that something happened. You would never know he had suffered such serious facial injuries. He looks great as he has put weight back on and has a fabulous coat.

“I’m so proud of the whole team at Nethan Valley Vets because everybody was involved in his treatment and recovery.”

Rowena and Chris are delighted with Koopa’s recovery, but will never forget the traumatic morning when their pet returned home, barely alive.

“He came home with blood all over his fur, his jaw hanging down and he was dragging his back end along the floor.

“When Claire examined him, she said the injuries weren’t consistent with a road accident, but wondered if someone had picked him up by the tail and dropped him from a height.

“Six months later, I went into an outhouse and noticed a hole in the roof with smashed glass on the floor. There are trees above the roof so we wonder if he has climbed a tree, fallen through the roof and his tail has got caught in some old wire cables. I prefer to think of that theory than him being cruelly treated.”

Rowena added: “He’s been left without a tail but otherwise he has recovered and is really happy. Without Claire and her team at Nethan Valley Vets, he wouldn’t be here. She was so supportive throughout his year-long recovery and I can’t praise them enough.”