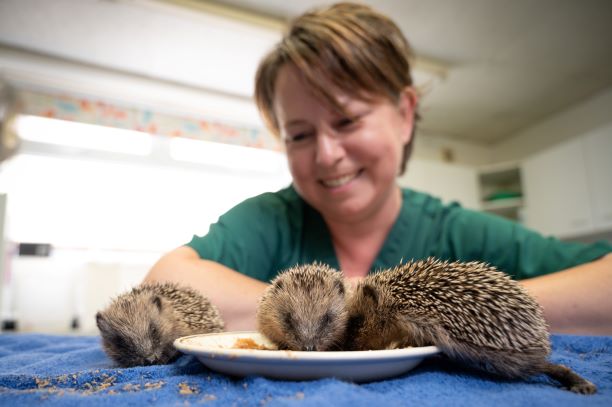 FOUR orphaned baby hedgehogs have been saved – thanks to the care of an Oxfordshire veterinary practice.

The tiny hedgehogs, including a rare albino, were handed into The Veterinary Surgery in Stanford-in-the-Vale, near Faringdon, after being found wandering in daylight in a nearby cemetery.

They were so tiny and dehydrated, they probably would not have survived but for the care of the practice, although, sadly, a fifth member of the litter had to be put to sleep as he was so ill.

The Veterinary Surgery head veterinary nurse Katie Owens helped to hand-rear the hedgehogs, with the help of her sister Alison Hageman, and they are now thriving and will hopefully be released back into the wild when they are big enough.

Nurses at the practice have named them Tommy, Chanel, Rebecca and the albino has been called Marilyn after blonde bombshell film star Marilyn Monroe.

After giving them emergency fluids injected under their skin, the hedgehogs, which are believed to be only four weeks old, had to be fed special cat food through a syringe. They were covered in fleas and in danger of developing anaemia.

Katie said: “Four of the hedgehogs were found initially by members of the public and then my sister went back and found a fifth one. They were all squeaking at each other when we reunited them, but mum was nowhere to be found.

“It’s possible the nest was disturbed by a predator and she fled or, more likely, that she was killed on the busy road near the cemetery. It would have been several weeks before mum would have let them fend for themselves so they wouldn’t have survived living in the wild.

“It was amazing the fifth one, who is called Chanel No5, made it through the night alone as she was so small.

“The fact they were out in daylight means they were either sick, hungry or dehydrated and are searching for food outside of their normal foraging time.”

Marilyn would have been especially vulnerable as albino hedgehogs are tempting prey to predators because they are so visible. She is still being hand-fed as she has not thrived like her siblings, but is now gaining weight.

Katie added: “Looking after the hedgehogs has been a lovely experience and they have put smiles on everyone’s face, although we had the sadness of losing one.

“We’re happy for people to contact us about wildlife that is sick or injured. Hedgehogs desperately need our help because they are in decline. We do not handle wildlife more than we have to. We urge members of the public not to pick up hedgehogs unless they are ill or in danger.”