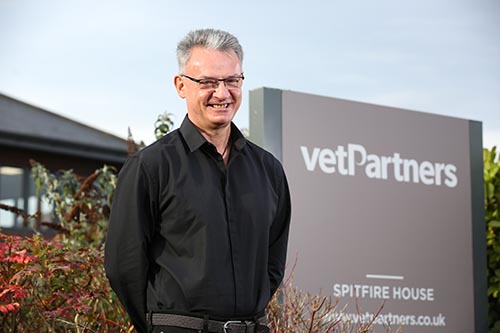 VETPARTNERS has appointed a new Managing Director for France as the UK group prepares for further European expansion.

The arrival of Vincent Parez has signalled VetPartners’ intent to increase its presence in Europe following last year’s expansion into Italy, and expects to welcome the first French practices to the group this spring.

Vincent, a former vet who specialised in ruminant reproduction, joins VetPartners after working part-time in the US for global healthcare giant MSD.

VetPartners owns 130 of the UK’s most respected veterinary practices, with 5,355 employees working in more than 450 sites, and he believes it is the perfect time for the group to expand in France with the country’s veterinary industry facing a period of change.

He said: “The French market is now fully open to the idea of veterinary groups. The prospect of being part of the VetPartners’ adventure as country lead for France is very exciting to me.

“It will mark a major evolution of the professional veterinary landscape in France.

“I believe VetPartners can sustainably contribute to the development of a global and innovative company, with a welcoming, professional network to improve welfare and animal health. We want veterinary teams to enjoy rewarding careers as part of a unique work environment.”

Vincent began his career as a vet in a mixed practice in Normandy. He then moved to Intervet, now part of MSD, as technical manager, specialising in ruminant reproduction.

After organising the World Congress of Embryo Transfer, he joined Pfizer, where he held various managing positions in human health and animal health. He returned to MSD as Business Unit Director in Swine and Poultry for Intervet Schering-Plough.

He then took over the Companion Animal Business Unit in 2013 with the aim of reshaping the French market following the launch of Bravecto.

He believes VetPartners’ culture of collaboration, support and creating a sense of belonging will appeal to practice owners wanting to be part of a larger group. He also believes the emergence of VetPartners will help the French veterinary profession rise to major challenges.

Drug distribution, with an expected change to European regulations, the feminisation of the profession, a changing professional landscape and concerns over pricing are all having a huge impact on the French veterinary industry.

Vincent said: “The European regulations on drug distribution are changing within two years but most vets are not even aware of the impact the changes will have. As the sale of drugs accounts for almost 50% of practice revenue, this is potentially a key issue.

“The professional landscape is being transformed. The development of buying groups for the last 10 years and the arrival of corporate groups in France are totally transforming the relationship with the pharma industry.

“VetPartners rises to meet the challenges by proposing vets focus on delivering outstanding care for patients and clients, while the group takes care of the others aspects of the profession.

“I believe that vets will discover the culture of belonging with VetPartners and will appreciate the idea of keeping their autonomy in daily practice, leaving the company to take care of what they do not want to manage like HR, pricing and negotiating with drug companies. I am expecting a lot of interest from practice owners because we are going to answer their major needs.”

VetPartners, which has its headquarters in York, was established by CEO Jo Malone in October 2015.

To support its growth, the group is backed by leading international investment company, BC Partners, which has Euros 17 billion of assets under management in private equity and credit across the globe.