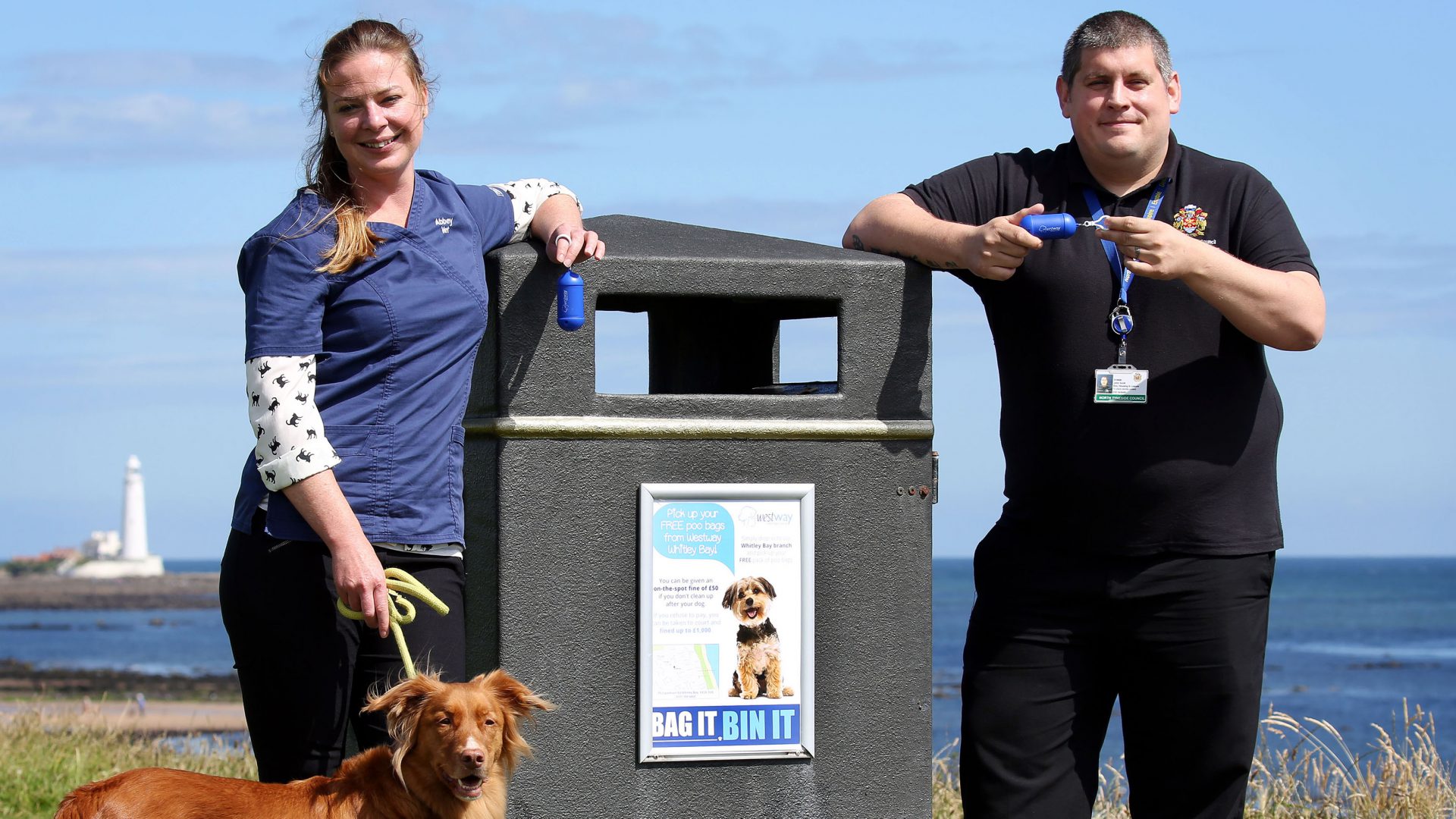 WESTWAY Veterinary Group has launched a major campaign to encourage dog owners to pick up the poo in Whitley Bay.

Westway Vets, which has a surgery in Whitley Bay, wants to promote responsible dog ownership, and is urging residents and visitors to the popular coastal town not to allow their pets to foul.

Throughout August, Westway Vets will distribute free poo bags to dog owners who call into its surgery in Claremont Road, and will also fund 10 bins along the seafront from St Mary’s Lighthouse to Tynemouth.

Dog fouling is a big concern across North Tyneside, where there has been a crackdown on owners who don’t pick up after their pets.

Some 44 dog walkers were issued with £50 fixed penalty fines over a two-year period until March 31 by North Tyneside Council’s enforcement officers. Four people were subsequently prosecuted in the magistrates’ court after failing to pay the fine, with the court imposing further fines totalling £3,400.

Abbey said: “Westway Vets is a firm part of the community in Whitley Bay, and we want to play our part in keeping the town clean and tidy for residents and visitors.

“Residents are quite rightly disgusted when there is dog mess left on the streets or the seafront, and we want to encourage owners to be responsible and pick up the poo.

“Most dog owners are caring, responsible people, who respect the local environment and pick up after their pet, but there is a minority who give dog owners a bad name.

“As well as being unsightly, dog poo can be a danger to other pets and people, especially children, as it contains different bacteria and parasites.

“Roundworms are common in dogs if they are not regularly wormed and can be transferred to humans, so it is advisable that anyone coming into the surgery for a poo bag also asks us about worming.”

Westway’s campaign, which runs from August 1 to September 1, has been praised by North Tyneside Council.

Jonathan Scott, a Community Protection Officer, at North Tyneside Council, said: “We are happy to have the support of Westway Vets as we continue to crack down on dog fouling across the borough. We have successfully prosecuted a number of offenders since the start of this year, and this is another positive step towards ensuring that everyone gets the message.”

Abbey added: “We are running our campaign in July, August and September when the better weather brings more dog walkers to the seafront. They can come into the surgery, pick up poo bags and worming advice, and head off for a lovely walk along the seafront, where we have bins to place the bags.”

Westway has 21 branches across the North East, from Wideopen to Darlington, and opened its latest surgery in Whitley Bay last November.