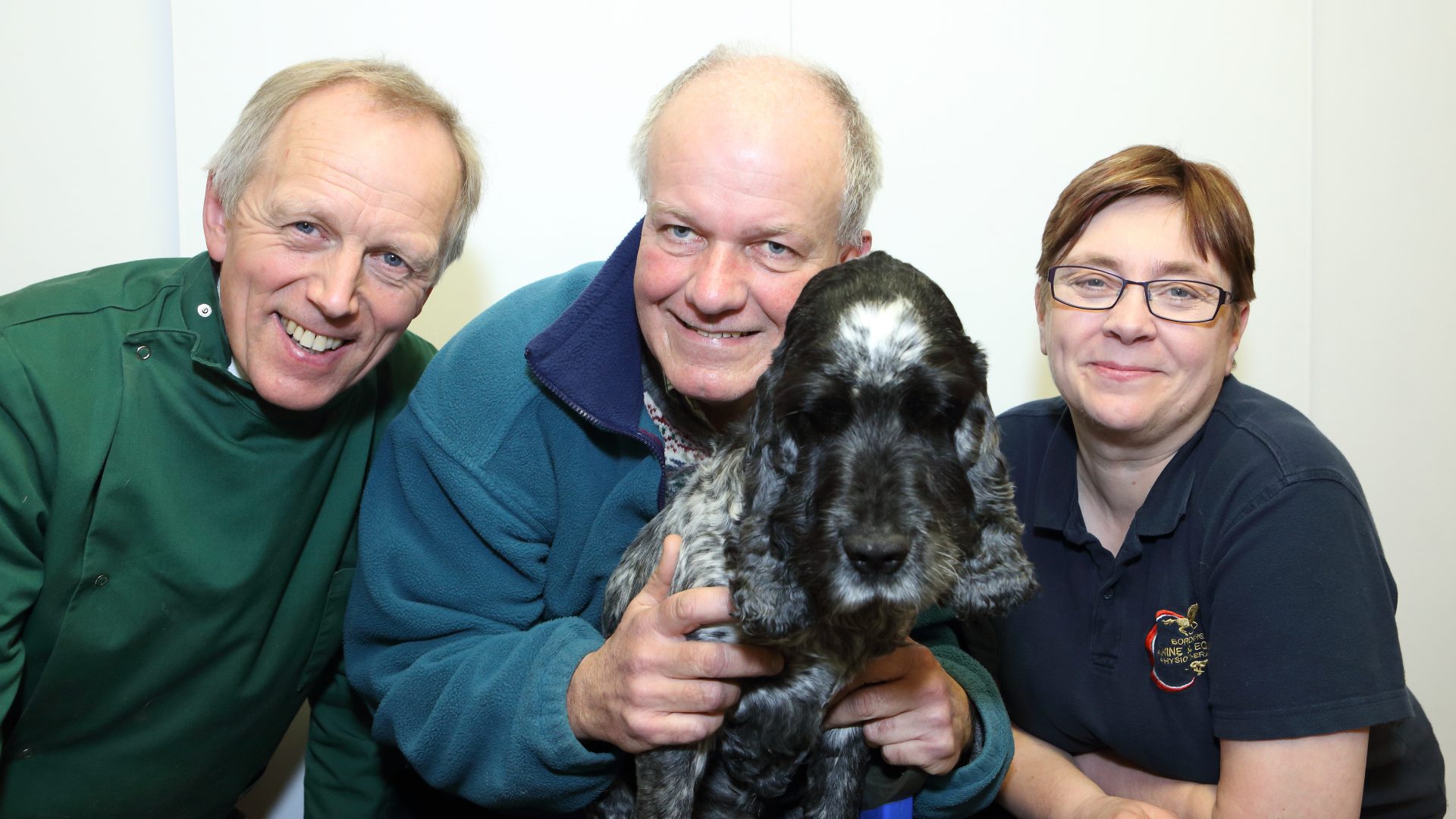 BARNEY, the unstoppable Cocker Spaniel, is preparing for the final leg of a mammoth Scottish trek – despite undergoing major surgery after a serious injury.

At the age of 13, Barney has a spring back in his step, thanks to the skill and care of Robert Young Vets in Kelso, where he underwent orthopaedic surgery after snapping the cruciate ligament in his stifle joint.

Along with owner Simon Neal, he had been walking the 212-mile Southern Upland Way, from Portpatrick on the south west coast of Scotland to Cockburnspath on the eastern seaboard, broken down into small stages.

But, after just 50 miles, injury struck in November 2015 and Simon feared their chance of ever finishing the demanding coast-to-coast walk was over when Barney, who is 74 in human years, suffered the injury.

The success of the operation, performed by vet Robert Young, along with regular sessions with canine physiotherapist Heather Halton at the surgery, left Barney raring to go once again and he has completed a further 130 miles of his epic dog walk.

Now Simon, who lives in Kirk Yetholm, is plotting the final 40 miles of the trek with his beloved blue roan Spaniel in early 2018 and is optimistic they will complete it by the summer.

“I really didn’t think we would ever get to the point where we would complete the walk because Barney was so badly injured,” said Simon.

“We always intended undertaking the walk in bite size stages. A couple of months after completing the first stage from Portpatrick, Barney was playing on open fields in Kirk Yetholm when he suddenly yelped and came limping over.

“I took him to the vet and there was a choice of an operation or allowing it to repair by itself and him being left with a limp.

“The operation went really well and he had lots of physiotherapy, but I was still amazed that he was fit and well enough to resume doing the Southern Upland Way. He loves the outdoors, sniffing away as he goes along, and he enjoys playing.

“We are keen walkers and Southern Upland Way is probably going to be the last big walk Barney and I will ever be able to do together but we have created some lovely memories together.

“We will start again in March when the weather improves and hopefully we will be able to complete it.”

Vet Robert Young recommended an operation to repair the stifle joint and performed the surgery with colleague Ann Anderson. He then advised regular physiotherapy sessions and, within two months of the operation, Barney was completing five-mile walks with ease.

Robert said: “To comeback from an injury like this and be able to clock up so many miles is incredible. He’s a plucky, wee dog, who enjoys life, and he has done so well to be able to continue this walk.

“Physiotherapy has been key to his recuperation as it is has made a big difference.

“He is a well looked after dog, who wasn’t overweight, which is important, and the surgery was done promptly so that gave him a good chance of recovering.”