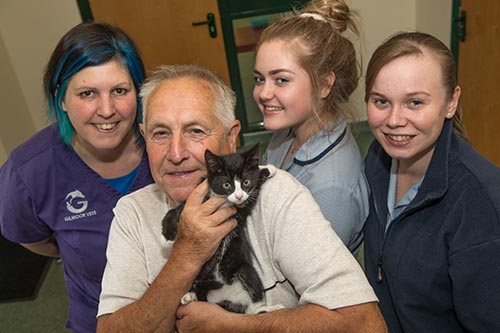 A DURHAM veterinary practice has saved the life of a tiny kitten that suffered horrific injuries after stowing away underneath a car bonnet.

Sox had to have a toe amputated and reconstructive surgery at Gilmoor Vets in Gilesgate, Durham City, to repair skin that had been ripped away on a front leg.

The mischievous moggy is believed to have suffered the injuries while travelling under the bonnet of the car with two of his brothers.

The six-week-old kitten was extremely shaken when he was rushed to Gilmoor Vets, where clinical director Deborah Stafford performed life-saving surgery, but has fully recovered and found a loving home.

Business owner William Holden, who discovered Sox and two other kittens had hidden under his car bonnet, rushed him to the surgery for treatment and has now adopted the homeless kitten.

Sox was part of a litter of five feral kittens born in Mr Holden’s garden shed at his home in Quarrington Hill, County Durham.

Mr Holden, who runs a business supplying landscape materials and decorative gravel, said: “I had just set off for work in my car, which was parked on my drive, but when I reached a crossroads, only 100 yards away, I saw something in the middle of the road that must have been one of the kittens.

“When I arrived at work, Sox’s brother jumped out from underneath the bonnet. One of the kittens must have been knocked over on my way to work. The next day a black and white kitten, who turned out to be Sox, turned up with his leg bleeding and in a bad way.

“I took Sox to Gilmoor Vets as he was badly injured. He must have fallen into the road but somehow made it the 100 yards home, which was amazing for a little kitten. I’ve used Gilmoor Vets for 30 years and the vet who operated did an amazing job as he was in a terrible state, but he has completely recovered.”

Gilmoor Vets auxiliary nurse Sarah Willetts, who helped to care for Sox during his week in the veterinary practice, said: “He was very shaken and scared, and hissing because he was in so much pain. It was a traumatic experience for such a young kitten.

“We decided to keep him and help him back to health following surgery. He was a lovely little patient and we are so delighted he has found a loving home. It is so rewarding when you see a stray get a happy ending.”

Mr Holden is a cat-lover, who already owns two other moggies called Boots and Tinks, but decided to adopt Sox.

The three other surviving kittens were taken with their mother to Consett Cat Rescue, but Mr Holden plans to adopt another kitten from the litter. Their mother has been neutered to prevent her having any further unwanted litters of kittens.

Mr Holden added: “Sox is showing no ill effects of what happened and hopefully something good has come of what happened as he now has a home for life. He is a huge character and a little devil at times as he chases the other two cats around the house and is full of mischief. I’ve had cats all my life and I live on my own so they’re great company.”

Gilmoor Vets, which has branches in Durham, Sunderland and Spennymoor, is part of veterinary group, VetPartners, which owns small animal, equine and farm practices across the UK.