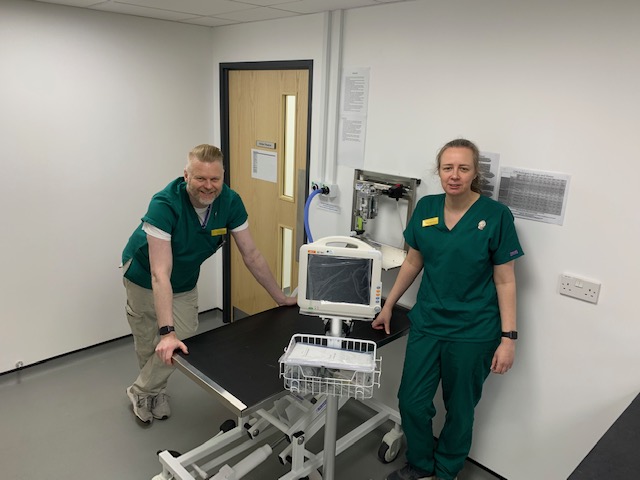 A SHOWPIECE South Wales veterinary hospital is celebrating its first anniversary after a traumatic seven months that has seen it devastated by Storm Dennis and working under Covid-19 restrictions.

Valley Veterinary Hospital in Gwaelod y Garth, near Cardiff, has bounced back from adversity and provided a lifeline for sick or injured pets after coronavirus lead to an upsurge in cases being referred to the 24-hour facility.

Just seven months after opening, Valley Veterinary Hospital was destroyed by Storm Dennis in February  – a major disaster that saw vets, nurses and 16 in-patients evacuated by fire crews in the middle of the night with the hospital under five-feet of flood water after the River Taff burst its banks.

After a frantic rush to complete the rebuilding work, the hospital re-opened just as the UK went into lockdown in March with strict social distancing guidelines in place.

Joint hospital manager Chris Butler said: “The builders were three-quarters of the way into the rebuilding project when the pandemic kicked in so it was a mad dash to get it completed.

“As a busy emergency hospital, the last few months have been extremely challenging as we need to handle urgent cases while keeping everyone safe.

“Having the hospital open again has been a lifesaver for the 35 surrounding practices we serve during the pandemic because many practices were struggling and referring cases during the day as they didn’t have usual staffing levels.”

The hospital celebrates its first anniversary on July 22nd.

Valley Veterinary Hospital was created from an empty warehouse, which transformed into a pet hospital – the most high-tech facility of its kind in Wales – at a cost of £2 million.

But the team was left distraught after a raging torrent of water flooded the new hospital in February. Equipment valued at several hundred thousand pounds, including a CT scanner, digital x-ray machines, ultrasounds, oxygen generator, lab equipment, dental machines and endoscopes were all destroyed in the carnage, caused by a month’s worth of rain falling in less than 48 hours.

The ground floor was left under a thick layer of mud and silt, and the entire building had to be professionally deep-cleaned and sterilised, before builders stripped it back to bare concrete and metal, before construction work could get underway.

Now, new operating theatres, procedure areas, two prep areas and kennels have been created on the first floor, while a new £150,000 CT scanner has been installed in June to replace the one that was destroyed.

Work is continuing on the ground floor, and it is hoped the entire hospital will be fully functional by the end of the year.

Mr Butler said: “It was unbelievable how much damage was done, and it was completely devastating after all the effort that went in to building the new hospital.

“Everything has felt very bleak with the coronavirus pandemic but the re-opening of the hospital has given us a focus and we have been in huge demand. Practices closed as we reach the peak of the pandemic, so we were increasingly relied upon by colleagues in the veterinary profession and pet owners.

“We can socially distance because it is a brand new, spacious building, and it lifted morale as everyone was stressed and worried about what’s happening.”

Valley Vets is part of UK veterinary group, VetPartners, which provided investment for the new hospital.