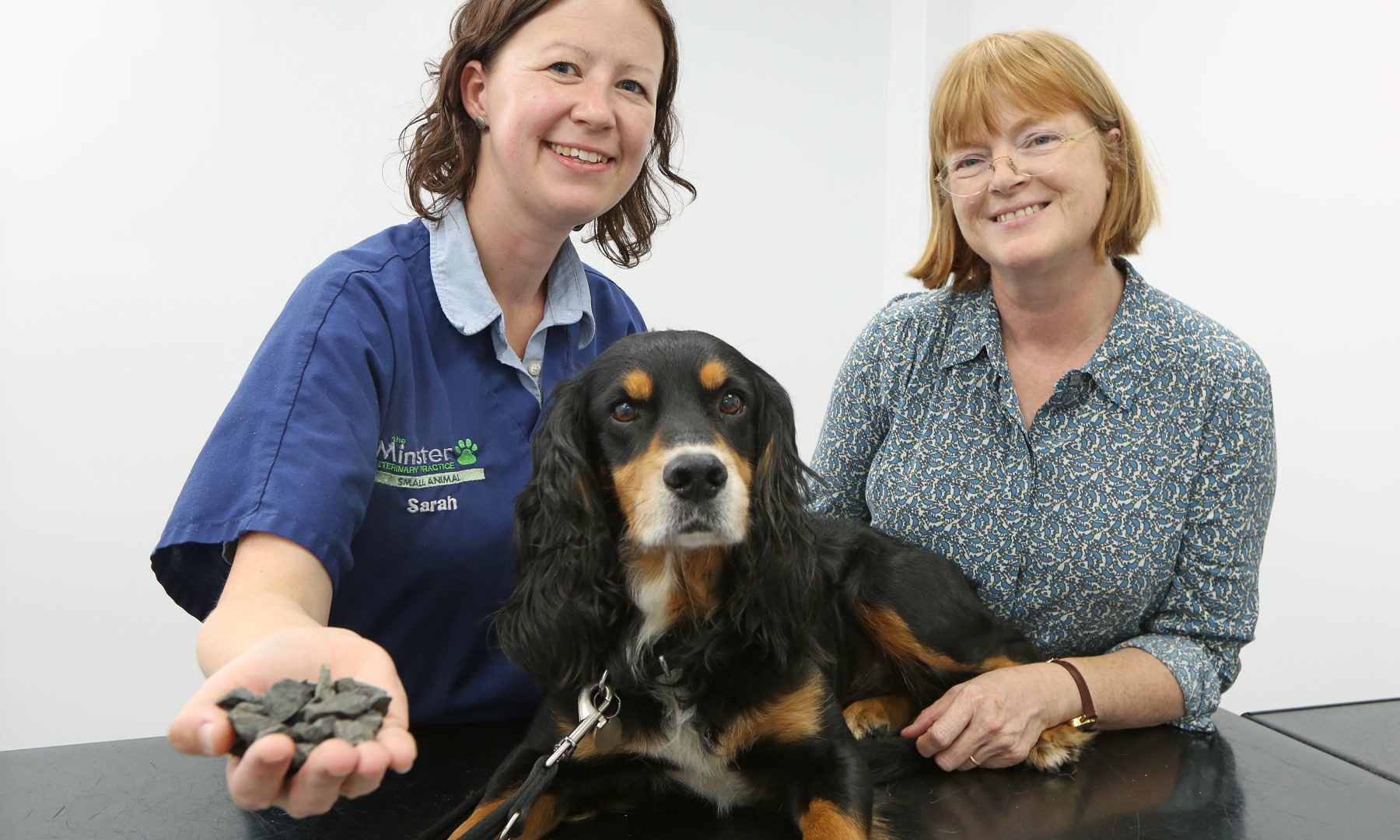 A FAMILY dog needed a life-saving operation after shocked vets discovered he had eaten a kilo of gravel – the equivalent weight of a small watermelon.

Chip, a seven-year-old cocker spaniel was taken to The Minster Veterinary Practice in York after concerned owners witnessed him vomiting and passing unusual objects in his poo.

Owners Fi Godfrey-Fausset and David Wheeler suspected Chip had eaten gravel whilst lapping up butter he had stolen and then regurgitated onto the ground in the back yard of their home in York.

The poorly pooch was taken to Minster Vets’ main hospital on Salisbury Road where he was examined by clinical director Sarah Ford.

Sarah said: “I examined Chip and could feel lots of small, hard objects in his stomach. He almost felt like a bean bag.

“We x-rayed his stomach which revealed he was filled with gravel. I have never witnessed anything of this scale, so I was shocked at first, especially since Chip was still bright and chirpy. You would never think he had a kilo of gravel inside of him.

“The main concern was that Chip was unable to eat or drink due to the gravel causing a blockage in his stomach. There was also the potential danger of the gravel causing perforation of the stomach and the decision was made to operate to remove it which was successful.”

Chip was placed under anaesthetic while the Minster veterinary team removed one kilo of gravel.

Fi and David have had Chip since he was a puppy and were stunned at what was found in his stomach.

Fi said: “Chip is such an energetic dog and although he was still bright, I knew he was not quite himself as he had not been very excitable for a couple of days.

“When I came home from work to find him repeatedly vomiting, I contacted Minster Vets who advised us to bring him in to the practice and they examined him straight away. I still can’t quite believe what was found inside our poor pup.”

Chip has now made a full recovery and his back home with his family.

Fi added: “I would like to thank the team at Minster Vets as their expertise has saved our beloved Chip from an uncomfortable and uncertain fate. They handled the situation calm and professionally and Chip is now back to his sprightly self.”

If you suspect your dog has eaten something it shouldn’t, seek veterinary advice immediately.